Skip to content
Previous Next
Swiss Atlas of Digitization

As diverse as the discussions about digitization are, so are their definitions. With the Atlas of Digitization, EconSight highlights the most advanced technologies in the field of digitization. Technologies that are most likely to drive digital transformation in all sectors of the economy in the future. These technologies include:
a. Artificial Intelligence
b. Cloud computing
c. Big Data
d. Virtual/Augmented Reality
e. Encryption technologies

The Digitization Atlas shows the number of abandoned patents for digitization technologies in Switzerland; these are broken down by company location. This reveals the current technology landscape in Switzerland. Which technology clusters can be identified from this?
When evaluating the data from 2019, it became apparent that Zurich is the digital center of Switzerland. One-third of the digitalization patents were abandoned in Zurich, which represents around 700 patents. Canton Vaud is in second place with just under 460 patents. In third place is Canton Basel, with around 200 patents, and shortly after that, with around 150 patents, comes Canton Aargau.
The canton of Zurich shows a good and even line-up in all five categories, while in Basel, for example, artificial intelligence stands out clearly from the other categories. Canton Vaud, on the other hand, seems to concentrate on encryption technology, as around half of all patents in this category come from this area. 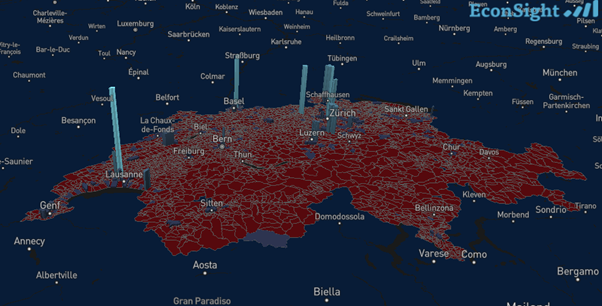 The top is led by a few companies

Kudelski leads the way with 213 patents. ABB and Roche follow shortly after. Alphabet and IBM are also among the leaders, with just under 256 patents between them. These five companies are responsible for around one-third of Swiss patents in the field of digitization technology.